Create an Account - Increase your productivity, customize your experience, and engage in information you care about.

Certain it is that the few who lived here during the early settlement of the county faced many hardships, but it is equally true that they faced them fearlessly and cheerfully. At no time were the early settlers in particular danger from the Indians, and the story of the early history is for the greater part a picture of peace amidst rough surroundings.

Kansa Tribal Range
The Kansa tribal range extended southward from the Kansas-Missouri River junction as far as the northern edge of Bates County, taking in the sites of modern Pleasant Hill, Garden City, Archie and Drexel. On their southeastern border they were neighbors of the Osage, although there is no evidence that either of these tribes ever had a truly permanent settlement in the territory of Cass County.

At early camp meetings southwest of Harrisonville after the white man came, as many as 500 Indians were often in attendance and seemed to enjoy religious services as much as the whites, with whom they mingled on such occasions. These Indians were reportedly Shawnees and Delawares, both of Algonquain linguistic stock.

Land Grant
In 1818 a grant of land in southern Missouri was made to some Delawares, but it was re-ceded by them in 1825. Most of them moved to a reservation in Kansas, while others had previously gone to Texas. Those who remained in the Harrisonville area were close relatives of the Sauk, Fox and Kickapoo tribes.

Early Settlers
The first white settler on the site of modern Harrisonville was James Lackey, in 1830. Others early settlers were Humphrey Hunt, John Blythe and Dr. Joseph Hudspeth. Lackey was considered a "squatter", as he built a cabin and enclosed a small field on the tract of public land taken for county seat purposes.

Town Site
Site of the town was fixed under an act of the Missouri General Assembly in 1835, by David Waldo of Lafayette County and Samual Hink and William Brown, both of Jackson County. In the same year, the first court met for the county, known as Van Buren County. The Justices James McClellan and William Savage, met in McClellan's residence about 3 miles southeast of Peculiar on September 14, 1835. William Lyon was appointed Clerk of the Court and county government was organized, included the setting up of Grand River Township.

Harrisonville Established
In the spring of 1837 the Town of Harrisonville was located by Enoch Rice, Francis Prine and Welcome Scott, who had been appointed Commissioners by the state legislature in the winter of 1836. These Commissioners in company with Matin Rice, the County Surveyor, met at the home of John Cook on April 3, 1837 and finally decided on Lackey's pre-emption claim. In May they laid off the town in lots 3, 4, 5 and 6 of the northeast and northwest quarters of Section 4, township 44N., Range 31W. Within these 160 acres there were to be 4 streets - Wall and Pearl running east to west, Lexington and Independence going north and south - each less than 40-feet wide. Fleming Harris was appointed as town commissioner on April 8, 1837. The first town lots were sold on June 12 of that year; those facing the public square sold at $20 each, the others at $10.

"DEMOCRAT" was strongly urged as a name for the new town but was finally rejected. Instead, the town was named after Albert G. Harrison, a U.S. representative from Missouri.

First Church & Other Buildings
On October 8, 1835 the first Harrisonville church was organized in the county 2 miles southwest of town known as Hopewell or New Hope Baptist.

The first house within the town was erected by Jason L. Dickey in 1836.

The first jail in Harrisonville and second for the county was established in 1838. Its site was 312 S. Independence. One of its successors is listed among the state's historic sites.

Railroad Lines
Harrisonville eventually was served by railroad lines presently known as the Missouri Pacific and the Frisco. Railroad construction was responsible for the notorious "Gunn City Massacre", the background of which began in 1857, when Cass County approved a large stock subscription for the Pacific Railroad Company. This corporation later surrendered the bonds to the new Saint Louis and Santa Fe Railroad, from whence they were still later assigned to the Land Grant Railroad and Construction Company of New York. Citizens of Cass County sought by injunction to prevent the funding of these bonds, but by legal maneuvering and collusion, a new set of bonds was issued secretly. Three men, who helped to perpetrate this swindle, including the County Attorney and a Judge of the County Court, were shot on April 24, 1872 while on board a Katy Railroad spur between Bryson, Missouri and Paola, Kansas, now known as Gunn City.

The year before the Civil War, 12 cities in Missouri had population of approx. 2500 or more. Harrisonville ranked 37th with a population of 675. In 1863 the town was depopulated, and most of the buildings burned, the jail among them. Fort Harrisonville was a Union stronghold for a brief period in 1863 and provided protection for loyal Union families. 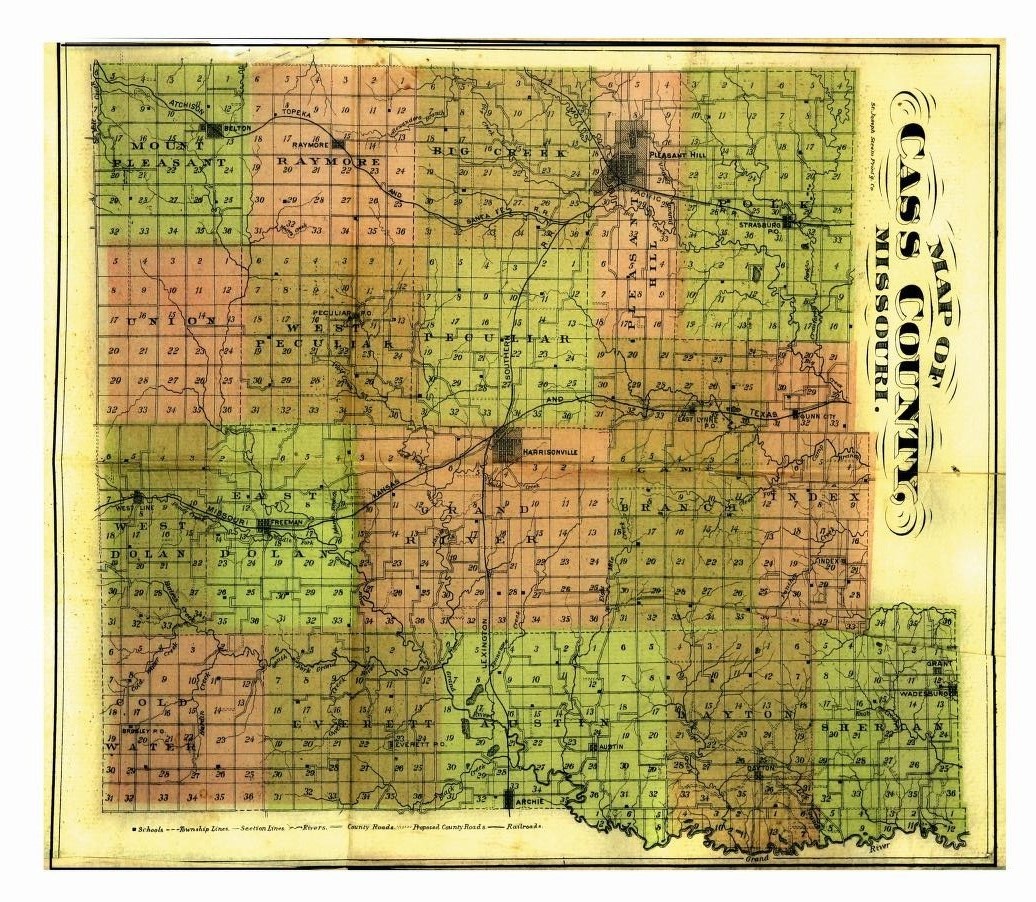